So I recently got back from a two week holiday trip out in British Columbia out here in Canada just getting to grips with the Mavic 2 Pro drone. I actually opted to buy this drone myself rather than be included in the DJI Forum review programme which has no guarantee you get to keep the drone afterwards.

I knew a drone like this would be a good choice for me. Why? Well.. If you’ve seen some of my videos you know I do a lot of hiking so something compact like this trumps the Inspire 2 in terms of portability. Yes the Mavic Air I have is great too and is still my favourite “holiday” style drone… but the sort’ve places I hike, along mountain tops is too windy for something as small as the Air, the ability of the Mavic Pro 2 reduces the risk.
So coming from an Inspire 2 I must be mad to take a hit on image quality? Yes & No.. For example the actual number of my audience on YouTube that actually view on a Mac or PC with a 4K monitor is small, Vimeo too, a lot of people like to view on tablets and phones still.
But what about as a professional? Yes naturally Inspire 2 Footage is a different league but with the right locations and use of natural lighting I’m more than confident I can still sell my footage to the same clientele.
Even the Mavic Air footage is good enough for broadcast TV, you just have to know how to get the best out of it. 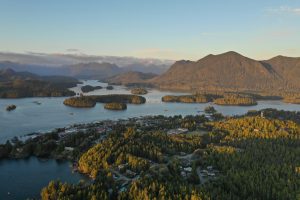 So what makes this drone so special?

Well I wouldn’t really call it special yet more like good marketing and technological progression. This is just a lightweight Phantom 4 Pro with a Hasselblad logo stuck on the front in the same guise as the previous Mavic.

Although the 10-bit colour adoption may seem like a strong USP, what you’ve got to remember is that unless you have a 10 bit monitor and the final video codec used is 10bit then its kind’ve pointless. You’re probably watching this on an 8-bit monitor or even your phone / tablet, and YouTube converts to their vp9 8-bit codec anyway.
Hold on a minute MaD.. Is 10-bit really pointless? Well there is actually a point to having the 10-bit over 8 and thats our ability to push and pull our highlights and darks better within post and have more flexibility with gradients. Now the other thing you have to realise is that there’s different types of 10-bit for example 4:4:4, 4:2:2 and 4:2:0 with the Mavic Pro 2 it’s only using 4:2:0 HVEC in HQ mode this would make sense as we only have 100Mbps to play with which isn’t much especially for 10-bit. So its only a small step in the right direction as far as I’m concerned. DJI need to bake-on 128GB of onboard memory then we’ll have fast enough write speeds for 4:2:2 which is the game changer people want.

On the 4k HQ and FOV D-LogM Mode there is noticeable barrel distortion which we have to correct in post. This is quite annoying, it was the same situation when recording ProRes on the Inspire 2. Apparently there isn’t enough overhead in the Mavic’s Processing unit to correct this..

To correct the distortion I simply use the Inspire 1 distortion correction Plugin in Premiere and adjust to my likeness then copy+paste the effect to all the necessary clips. I do this last after any colour correction as it can be quite hardware intensive and will slow down your workflow especially in Premiere.
For the HQ Mode simply use choose -5 on the Inspire 1 Lens Correction Tool making sure you’ve selected the correct size which will be UHD 3840 x 2160.
For the FOV Mode I find -11 on the Curvature with the 3840 x 2160 Inspire 1 Lens Correction Tool to usually work ok. It’s unfortunate that there’s so much barrel as the image becomes quite cropped and we chop off a good chunk of the image. Will DJI ever fix this in future firmwares? 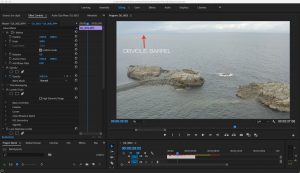 The Mavic Pro 2 is supposedly only using a part of the 1″ Sensor on the 4k FOV and HQ modes. It is said that the main processing chip for the Mavic Pro 2’s is the Ambarella H3. This SoC is capable of 8K 30fps video and 4K UHD at an impressive 120fps. The video modes of the Mavic Pro 2 however fall far short of this chips capabilities.

So why is this and why use only a partial sensor readout?

Well it could be a number of factors :

There is some positive takeaway. The HQ mode is actually a more realistic representation to what we see with the human eye than that of the wider Full FOV, so there’s scope to shoot in both modes and mix the shots up in for your creations.

All these drone shots were filmed without ND filters so i’m sacrificing a bit of sharpness with these videos by increasing my f.stop to allow me to have shutter at double my frame rate in this instance 4k UHD at 3840×2160 f/11. I would speculate that with this drone perhaps an f/stop midway around 4-5 should allow for optimum sharpness. The overall D-LogM image is a bit soft for my liking so I’ll look to run a +1 or +2 on the sharpness value in the GO App leaving the other values around 0. I can also add a bit of sharpening in post as required.
Freewell kindly hooked me up with a set of filters, so I’ll be looking forward to capturing video at my desired Aperture and Shutter Speed in future usage.

So what about the Mavic 2 Zoom?

It’s good too, the logical progression from the Mavic Pro Platinum. I like the fact it has an optical zoom which gives filmmakers the instant option of focal ranges. The Dolly Zoom effect is a bit of a gimmick, I mean you can kind’ve replicate that effect already with ‘the dronie’ so long as you have good foreground and background separation.. It’s just another marketing hook but still nice to see none the less much like the other intelligent flight modes of POI, ActiveTrack 2 & Hyperlapse.

What I want from a drone, take note DJI :

Basically what I want is something that can produce video like the Inspire 2 with ProRes recording. Does this drone do it? Nope, but does it get me a step closer to what I want? Yes of course.. If it can make my bag lighter for those epic hikes then of course its a welcome proposition.

I’m willing to pay up-to $2500 USD for a Drone that can shoot ProRES 4:2:2 minimum.. in the same guise as the Mavic with up-to 3 lens options that would be my ultimate drone and easily possible today. By turning off features such as obstacle avoidance in theory should free up computing power so I’d like this diverted into something more useful like I don’t know… full use of the sensor!?
The Phantom is old-hat, redundant design in my opinion even though it has more space for cooling than the Mavic. The Phantom 5 will still be a good drone if it ever comes to fruition but its not something I’d pay for especially as it will cost much more that the Mavic Pro 2 when you add up the extras. You may as-well take a punt on a 2nd hand Inspire 2 for superior images and flight (when it works that is!).

If GoPro can offer 4K 60fps then you can too DJI so make it happen. Other than that, two thumbs up it’s really nice and I’m happy to own the Mavic Pro 2. Even though its never a finished product with DJI you still gotta hand it to them for giving people the opportunity to be this creative.

Education Surrounding the Mavic Pro 2 Below : 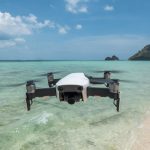 Travelling with the Mavic Air 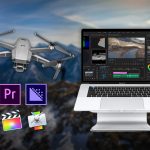 Speed Up Your Workflow